skip to main | skip to sidebar

Black History month is a reminder to me that I am a part of Canadian Black History, not just because I grew up here and built my life here but because my family has made contributions to the fabric of life in this country and specifically in the City of Toronto.
Although I may think of my Grandmother often, February gives me the opportunity to really assess what she accomplished as a young woman, way back in 1927, when she left her native Jamaica, on board a ship headed toward Halifax and other places she never heard of in her life. I suppose if she had been born to one of the wealthy Jamaican families whose children were highly educated about the world, it might have been different but she was a simple, poorly educated girl whose strength was tested over and over as she struggled to find a way to help her large family back home. At the core of her desire to do better was her only child, born into sadness and heartbreak, who she left behind with an uncaring father. In her dreams, it was clear that in the land of opportunity, if she could find a way to give him more opportunity for a better life, then she would do so.
I have been to Halifax a few times. Mostly, I go by plane, complete my business there, sight see a little and then return. On my last visit there I was alone. My wandering footsteps took me to the train station. In a moment of clarity back in 2004, I realized that my grandmother would not have landed in Ontario without first been processed through the maritime port, which boasted so much history of its own. It dawned on me that indeed my own history in Canada began at that point. When Agatha boarded a train from Halifax headed to Kingsville Ontario she opened doors not just for herself but for many of those who came after.
Years after her arrival in Canada, and by then married to a wonderful man who had taken a similar journey, my grandmother settled in Toronto. With very little education, she worked at menial jobs, saving nickels and dimes to find a way to buy a house. In 1940, she purchased a property on Dufferin St. and there she used her kind heart and natural ability to organize her family, her community and her heritage so that what she was not able to achieve with her son, she was able to achieve with her grandchildren.
As a child growing up in Toronto in the fifties, my siblings and I were different. Many times there were no other Black children around to reflect our own experience, although diversity was not uncommon in my neighbourhood. My grandmother was able to generate a sense of confidence and deep aspiration within us to achieve what she did not. Education and independence were her keywords. I believe that no matter what success I have in life, I will not be able to match the success of my greatest role model, my Grandmother and each February as Black history month rolls around, that is where I turn my thoughts and my deep pride.
Posted by alma at 7:19 PM 1 comment: 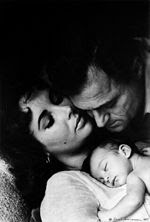 What does one do when their hero dies? Bring back memories of what made that person a hero. When I was a child growing up, my hero or heroine as they used to be called was Elizabeth Taylor. I loved everything about her, admired her hair, her figure, her acting, her choice in husband, her lovely eyes and eyebrows. My room was full of her pictures and if I ws going to pursue another career, it would have been to act because she drew me to the profession with her wide array of characters.
Almost every news story today has been about her love life. It was wild but she came from a generation of women who did not live with men unless they were married. It is always the lead story. Let the lead be the wonderful actress and humanitarian that she was. Let's talk about her roles and what she brought to the screen.
I have seen so many of her movies, I have probably forgotten more than I remember. In that time of living differently, probably my favourite would be The V.I.P.'S. As soon as I saw her smoke a cigarette, I knew that I wanted to look just like her. I hope that anyone reading this will remember that smoking used to be cool.
She was lovely in that film and in my opinion at her loveliest. My favourite photo, her and Mike Todd and their little daughter, shortly after her birth.
She was great, a true legend, a gorgeous beauty and a fine actress. May she rest in peace.
Posted by alma at 2:55 PM 1 comment:

I do seem to spend more time writing than reading. I think I even spend more time buying books than actually sitting down to read, something which is troublesome but mostly due to work restrictions. Even if I only scan a book quickly, what is important is the message. I scanned a book about signs and omens. It would have been one of those that would have been lovely to read. I get its message. Really, just pay attention to things which happen in a day. There is always something to be gleaned from it, or something which will have importance.
Today, on one of my shortened forays into the big city, I did my usual round of hairdresser, dentist, shopping and just idly noting all the changes in my old neighbourhood. Towards the end of the day, when I dropped of my hubby for a long overdue haircut and I went to the Occult shop to browse for the 15 minutes it would take to trim his hair. By the end of the day, four things which hold some significance melded together in a message I need to assess.
In a newspaper my husband picked up earlier there was a story about the great Ethiopian runner Abebe Bikila, my olympic hero. It was the anniversary of his olympic win. Imagine 50 years celebrated on September 10. How lovely to see this honour for him. Kip Keino would be my other hero. Their courage and stories were so inspirational to me as a young girl.
The Occult shop had an interesting book called Hekate Soteiro. It was expensive. I was told by the sales girl that it was Sarah Iles Johnston's PhD paper. I had to buy it. Hecate is my current hero. Although not new, I noticed for the first time, the Crow's Magick tarot deck. My book, The Will to be True/In the Shadow of the Blackbird depends heavily on the myths of the Blackbird, raven or crow in part two. An image of the crow sits on it cover. Finally, I have wanted to be a JP for a long time. I applied before and was not successful but they are looking for candidates again and I will try again.
Four signs/omens - things generally important or special to me. Where this is going I don't know. Lately, I feel change, a need to retire from nursing and move into something else. Maybe this is the time to make change.
Posted by alma at 9:06 PM 1 comment:

We are now well past the bloom of summer. My lovely clematis are struggling to still put out the occasional bloom and today I found new branches on my lavender. How nice to see even a dying plant struggling for the last gasp of warmth to remind us how beautiful it was and will be again.
Feeling much better about the future. My husband's recovering in a way which has been challenging but we are working towards a future which now seems permanent, where as before there was nothing to build on. Nothing is final yet. He still has a long way to go but it is one step at a time.

Publishing my book, The Will to be True/In the Shadow of the Blackbird and finally getting it on the shelf and hopefully selling has been a revelation. I am no longer excited. I am determined! The most exciting part was picking the cover and seeing the first hardcopy. Selling it is definitely not my strong point. I hope people will be kind and buy it. Just like my husband's progress, sales will be slow and require that I put in more effort than the writing but I am liking this.
Gee, it feels like giving birth to a baby and wanting to tell everyone its the most beautiful ever. We need someone else to do that without looking foolish. So I thank those who buy my 'baby' and tell me its beautiful. It warms my heart, as it should and makes me want to make another one. Fortunately, unlike caring for real babies which is my life's work, there will be no sleepless nights and I would be doing something I really enjoy in this fall season of my life.
Posted by alma at 5:27 PM No comments:

Labels: my book, The will to be true, writing progtress

ON THE HOME STRETCH

When paul McCartney sang of the long and winding road, he knew. Even still, I consider this journey of mine and my husband' to have been fairly short in the scheme of things but long just the same. It is a winding road which right now seems to have landed right back where we started just over a year ago. Even if we are on the same summit I hope the way we move from here will have a different outcome.
The surgery to replace his hip was over 4 hours long. He was home in 4 days, weakened but the experience and not yet seeing a walking light at the end of the tunnel. We are back to wheel chairs and walkers again. He is just reliving trauma but I see definite hope for the future. His pain in combination with his experience last year is disheartening. I am seeing it differently and while I cannot now tell him that his pain is 'better', he is in a kinder gentler place and I have hope.
Posted by alma at 4:39 PM 2 comments:

alma
I have entered the realm of Hecate and despite a wonderful third age, I am still at the crossroads of life looking for signposts along the way so that I may still discover untold paths.